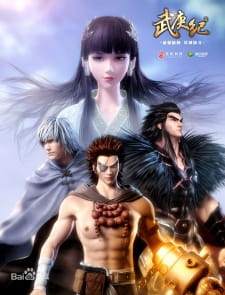 Plot Summary: A messenger of the Heavens has arrived in Zhao Ge, which has been ruled by the Shang dynasty for generations. The current emperor, Zi Zhou, refuses to bow his head before the gods, and declares to the messenger that he will no longer accept the tyranny of the Heavens. The gods do not take this kindly; and soon, the emperor of a neighboring land, Wu Jifa, leads a crusade against the rebelling Shang. During the battle, the Shang forces are vastly overwhelmed, and just when the capital is inches away from being taken, Zhou joins the fight. Although he breaks through the enemy ranks and makes his way toward Jifa, out of nowhere a god falls from the sky, landing right before him, prepared to personally deal with the troublemaker.

Other name: The Legend and the Hero, Feng Shen Ji, Chronicles of the God's Order, 武庚纪